It was 3:00pm Sunday afternoon on December 7th of 1941, Pearl Harbor Day, "A day that will live in infamy". We had all heard the crushing news of the Japanese sneak attack on our Naval and Armed Forces in the Pacific early that Sunday morning. Gathered for the usual Sunday dinner at the home of Mr & Mrs Roland L. Northrop, were his very close family; his wife, one son (Orson) and two daughters (Dorothy, Elizebeth) with their spouses.

During the grave conversation around the dinner table that day, there was a slight pause and R. L. Northrop stated that he knew that his family would go their separate ways to fight in the various branches of the service. But he felt that when the war was won and they were all back together again, the time would be opportune to form and start their own wholesale hardware company.

In his 40 years he had become known as "Mr. Hardware" or the "Dean of Hardware" in the Northwest. He started in 1919 as a clerk at the original Spokane Hardware Company, moving on to work at the old McGowan Brothers Hardware as a clerk and a buyer of builder's hardware. While there, he worked with a young man named Henry J. Kaiser who went on to make quite a name for himself in ship-building and aluminum.

He then moved on to the old Holley Mason Hardware which was bought out by Marshall Wells Hardware, which at that time was one of the largest hardware distributors nationwide. He was with the Marshal Wells Company for 37 years as manager and buyer of their builder's hardware department. The war was over and his family had come home, with his dream of the future still foremost in his mind, they founded Spokane Hardware Supply, Inc. in October of 1945. "R.L.", as he was then affectionately called by all who knew him, was 58 years of age, when most men think of retiring. 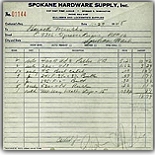 Under his sage guidance, he taught his son Orson, and two son-in-laws the hardware business and through depressions, nationwide strikes and two more wars, the company continued to prosper and grow. "R. L." passed away in May of 1956, but he lived to see his "dreams of the future" grow into a vibrant and robust business. He would be pleased to know that his son Orson continued to direct and grow the company with the same core beliefs that he founded the company on. Offering the "Highest Quality Products", the "Best Customer Service", and a "True Commitment" to both trading partners and employees.

Orson's son, Stephen James Northrop, was the third generation to be active in the family business, leaving school to help the family run the business due to health events. Applying his passion for architecture & drawing, design and hardware to bring print catalogs to the market in 1982, a one of a kind showroom largely built on the weekends one board at a time, proudly showcasing the "Jewelry" we offer and eventually taking the company's offering online in 1995, a true visionary. Steve taught his son Andrew the business from the ground up starting in 2003, putting him to work in the door shop welding and pulling orders in the warehouse. Andrew quickly developed a passion for the customers, the products and the industry while attending college at Eastern Washington University. In 2019 Spokane Hardware Supply, Inc. entered its 4th generation of family ownership.